That inflamed skin in the diaper area with the rashes, and the reddened and cracked skin is very troublesome for your baby and perhaps heartbreaking for you the parent as well. Diaper or nappy rash is a common childhood ailment that infants could suffer to a less or more severe extent at some point during the first year of life.

Rather than the diaper itself, it is the skin coming into contact with moisture that is the culprit responsible for diaper rash. This moisture could be from urine, feces or sweat. Apart from the actual wetness the enzymes contained in infant feces and the urea and ammonia in urine that compound the problem.

Some experts say that the type of diaper used – cloth or disposable – has no bearing on diaper rash. However there is some evidence to suggest that a disposable diaper with the ability to turn moisture into gel could be better for a baby than a wet cloth nappy that is not changed promptly. 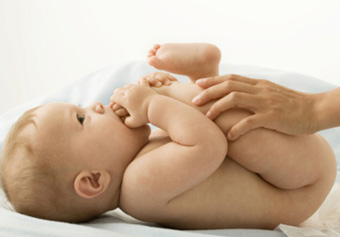 Letting a baby’s skin remain open is the best way to prevent diaper rash and even to arrest emerging diaper rash before it gets worse. However this is usually impractical, so what parents and caregivers can do is, they can let a baby remain without a diaper for some extended periods each day as an when possible. Baby’s tummy time, play time, feeding time or even short naps can be accomplished without a diaper on a soil proof mat.

When changing nappies, it is important to be very thorough, but at the same time gentle enough not to chafe baby’s skin. At each nappy change, make sure that the diaper area is completely dry and use a barrier cream (usually zinc oxide or petroleum jelly) that will prevent the moisture and other contents of urine and feces to come into contact with baby’s skin. Also avoid tight fitting diapers. Diapers that allow baby’s skin to breathe are best.

While most cases of diaper rash can be treated easily at home, some cases may need special attention. Various treatments such as bufexamac (Parfenac) lipid ointment, lotion containing Vitamin A, 2% eosin treatment, cornstarch, topical sucralfate, dexpanthenol ointment and lanolin could work for severe diaper rash.

The extent to which they work will vary greatly. This will depend upon your baby’s skin type and the extent/severity of the diaper rash. So the best thing would be to have the situation evaluated by your pediatrician so they can prescribe the best treatment. It is best not to experiment with your baby’s skin.